Skip to content
You are here:Home-Analytics, Investing, Stock Market-The “Everything Boom” is about to Bust. Are you Ready?

The “Everything Boom” is about to Bust. Are you Ready?

“All Good Things Must Come to an End!”

Complacency has taken over. I’ve been here before, in 2006, when any fool could make money in the markets and think they were brilliant. I have no doubt in my mind that the markets are building up for a Correction and the “Everything Boom” will come to an end!

For those who have come to know my approach to investing and trading, you will be aware that I am not in the game of predicting the markets. It’s just not a successful method for consistency in returns. My approach is that you need to be able to read the information that is available to you, form an opinion, adopt a strategy that suits, and execute.

But the state of the current environment has me worried. Very worried!

Like many of you, I have joyously ridden this stock market boom and want to see it continuing for much longer. There is no easier way to make money than to sit at a screen, check positions for action, and then just watch the balance increasing.

It was like that in 2006 when I was a Private Portfolio Manager. At the time, we had experienced a Bullish market from 2004, which ended in 2007 as the GFC (Global Financial Crisis) unfolded. During that time, the S&P500 index had risen more than 40% in a 3-year time frame.

The current bull market started after the GFC in early 2009. Aside from a period in late 2016/early 2017 when the markets consolidated in a 10% range, this Boom has seen an increase of more than 260% from the low point in 2009 to this weeks new all time market high. That’s an average of nearly 30% per annum, which is 3 times greater than the long-term average stock market return.

This rate of return is not sustainable!

Bitcoin, and for that fact Cryptocurrencies, have been the main headline grabber in recent months. Its’ spectacular rise and subsequent fall (down 50% from highs at time of writing), have highlighted to me that we need to be vigilant with the current state of the Stock Market. Now is the time to be concerned!

In the current US environment, Everything is booming!

The US economic environment doesn’t provide the same glorious picture however.

When I put this altogether, my opinion is that I don’t think the rate of return we have in the markets, is sustainable. Investor Sentiment is high, euphoric almost. But there are some real underlying problems in that the Economic Growth is just not there, and Debt is about as high as it has ever been.

Economist Hyman P. Minsky developed the 5 stages of a Bubble, in his book “Stabilizing an Unstable Economy” (1986). These are:

Joe Kennedy, father to US President John F. Kennedy, sold all his stocks days before the crash in what turned out to be the Greatest Depression of all time. He is quoted as stating:

“You know it’s time to sell when the shoeshine boys give you stock tips. This bull market is over”.

How many people are talking about Bitcoin? About booming stock markets?

I believe we are in the Euphoria stage of Minsky’s 5 Stages of a Bubble. We are now at a point where we need a trigger. Something fundamentally based that will result in the Financial Stress.

For the GFC, it was defaulting home loans. For the Tech Crunch in 2000, it was over-inflated prices in Technology companies. And every other Crash/Mania/Recession has had its own trigger. Whether that was the Oil Crisis of 1973, the Great Depression, Tulipmania, or the South Seas Bubble.

Run for the Hills! What am I to do?

Ok, so there’s no point driving the fear of a crash into you without providing a solution.

First and foremost, I am a trend trader. Having been a Dow Theorist since I started in the markets 20 years ago, my investment and trading decisions have an underlying approach of trend trading.

Right now, the trend is up. Yes, I believe we are at the Euphoria stage, but this could last months, or even into 2019. Again, I don’t get into the game of predicting – I analyze the information I have now and implement strategy to suit.

My opinion is that 2018 will have corrections. The year still has a strong probability of finishing higher, albeit at a slower rate of return. Again, an average 30% per annum is just not sustainable.

The Fundamental Trigger isn’t yet presenting itself. Could it be Cryptocurrencies; US Politics; Government Debt; a new Middle East Crisis; a major global Cyberattack; War between the US and North Korea?

When the Fundamental story starts to unfold, and then influences the change in market behavior to end the current trend, only then will it be time to act.

But if you don’t know what to look for, you will be the one left in financial distress when the Everything Boom comes to an end.

Want to know more about the Covered Call Strategy?

To help get you started, here’s a FREE eBook with some anecdotes from my experience managing Funds with the Covered Call strategy 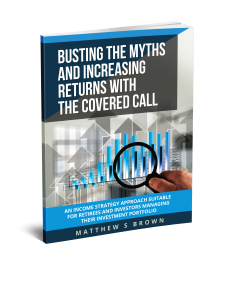 About the Author: Matthew Brown

Matthew is a 20-year veteran of the markets. Aside from holding roles as a Funds Manager, Derivatives Advisor, and Lead Analyst, Matt has written hundreds of articles for various firms, developed educational material and presented at hundreds of events to thousands of people throughout the Asia/Pacific area. MatthewBrownMentoring.com is a vehicle where Matt can provide his views and opinions on market investing and trading, drawing on his successful 20 years in the industry. He hopes to provide a professionals approach to the ‘home’ investor/trader so they can achieve financial success, realistically and safely.